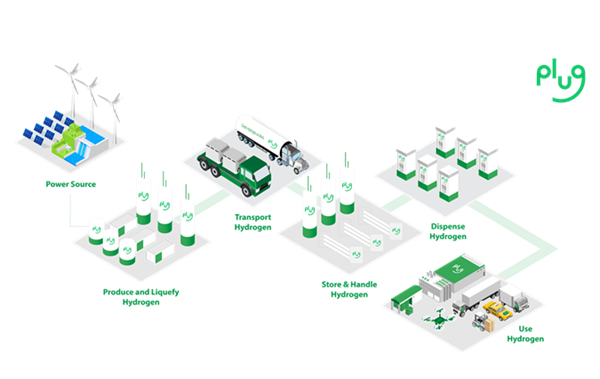 Plug Power (NASD:PLUG) is the hydrogen fuel cell company that counters the argument that the publicly traded enterprise is only concerned with only next quarter earnings.

For the last 20+ years, Plug Power (NASD:PLUG) has been chasing the dream of using green hydrogen fuel in commercial, industrial and consumer applications.  Recently, the success of PLUG in this endeavor has led to its recognition as a “best in class” hydrogen fuel application company and a sharp increase in its stock price.

In an October 20, 2003 interview in the Wall Street Transcript, David Smith, a Vice President in the US equity division of Smith Barney Inc. gave investors a first look at the young company.  Mr. Smith was covering power technology and multi-industry companies for Smith Barney, and had joined the firm in early 1997.

At the time, Smith Barney’s analyst team was the number one Institutional Investor ranked electrical equipment/multi- industry research team and PLUG was trading at about $65 per share.

In this interview, the Wall Street Transcript asked:

“This fuel cell space has been an area that everybody is talking about, yet nothing much seems to happen. How do you see it?

“Yes, it is definitely a farther-out-there sector.

I often refer to it as a DCF-based sector and that really comes under the valuation on the stocks.

There are a lot of assumptions that are actually made into when markets will develop.

Very few, if any, of the companies today have commercial products. You will probably see the first commercial fuel cells that you can buy as a consumer hitting the market in 2004 through 2020.

And the order that you are probably going to see that in is beginning with micro fuel cells (for laptops and cellphones) and then standby and backup power systems, and then residential and small commercial stationary systems followed by, farther out, bus and automotive markets.”

With fuel cells, a similar metric applies in a residential application, but mind you, the systems have got to come down in price probably 10 times from where they are today. Plug Power (PLUG) has come out and said they are going to be offering a system later this year at $3,000 a kilowatt.

But ultimately you have to get down to a point where it makes sense for the consumer to buy one of these.

Realistically, the recent blackouts have shown us that we are dependent upon electricity for almost everything, from gasoline, to getting cash
at the ATM, to buying groceries ‘ reliability and quality are an issue.

Within the home today, we are not as reliant on power quality. I think ultimately today we really look at it and say, ‘How much are we spending on our electricity bill?’”

The initial applications projected in 2003 seem slightly odd from 20 years of hindsight.

“A couple of small companies are out there making them today that will actually go right into the back of your cell phone and into your laptop, and you will fuel them with a methanol cartridge.

Mechanical Technology (MKTY) last week announced a deal with Gillette (G), whereby Gillette is going to co-develop a methanol-based cartridge refueling system that will go onto your cellphone and you will be able to walk downstairs in your office building or outside of your apartment and actually buy one of these cartridges and the cartridges are going to be designed to last between 15 and 30 days.”

And while no one today is powering their iPhone with Plug Power (PLUG) hydrogen fuel cells bought in street level retail stores, there are some applications predicted by Mr. Smith of Smith Barney that resonate today.

“It will cost them a lot of money, but the opportunity cost could be huge if someone like a Plug Power (PLUG) which is teamed up with Honda (HMC) came out with a residential system so that you could refill your car in your garage.

I really think that the automotive market is going to be driven by competition.

We are already seeing it with Honda and GM (GM) and Toyota (TM) battling it out to have the first hybrid vehicle units on the road.

Similarly, the hydrogen infrastructure is going to be battled out in the competitive field from companies like Honda saying, ‘Why don’t you put a system into your home…by the way you can also refuel it while you are at home, and you don’t have to go the gas station ever again.’

In addition, companies that make specialty gases today that already make hydrogen could open refueling stations on the road for additional
competition to the oil companies.”

Even at this stage, as Mr. Smith points out, the role of the US government in determining if this renewable source of energy would prevail was important.

“…the first thing I can point to is this year’s State of the Union address, in which Bush actually mentioned fuel cells; nobody expected
that.

He actually devoted a whole paragraph to fuel cells and how they were needed to attain energy independence.

That is critical in light of global events of the past 24 months.

Having said that, though, some people are starting to question the commitment of the Bush government, although in my view I think that they have done a pretty good job at getting the FreedomCAR program up and rolling and directing some funds and realizing as well that it is not going to happen overnight. ”

Soon after the Smith Barney PLUG analysis, Stephen Sanders, a Vice President with Stephens, who was promoted to Analyst in January 1999 and in 2000 initiated coverage on the energy technology subsector.

In his September 27, 2004 interview with the Wall Street Transcript, Mr. Sanders of Stephens analyzed the stock market potential of Plug Power (PLUG) as well.
At that time, PLUG was trading at about $60 per share.

The company has done a good job of reducing costs and improving system reliability over the past several years. Year in and year out, they’ve
made good steady progress, and they are now selling a product that is competitive in select markets with incumbent technologies that are based on mature technology.

So it’s a company that is quite a ways from profitability but is worth spending time on due to their long-term potential. So if you are looking for a higher-risk, higher-return fuel cell play, Plug is an interesting company.”

In 2004, Mr. Sanders also indicated the impact of political considerations.

“Politically and economically, we are seeing a much more intense focus on energy independence.

It’s obviously an election year ‘ coal, gas, and oil prices are high; the economy is chugging along; environmental concerns are becoming more acute and energy is in the news daily.”

If we fast forward to 2014 to a February 3 interview with the President and CEO of Plug Power (NASDAQ: PLUG) we are told a more prosaic yet realistic focus for the company.  Unfortunately for “buy and hold” investors, the price of PLUG per share had dropped to $3.

Andy Marsh joined Plug Power as President and CEO in April 2008 and the stock traded between $30 and $35 per share that month.

Under his leadership, Plug Power had become a leading innovator in the alternative energy field, with a focus an entirely new hydrogen fuel cell (HFC) market in the material handling space.

And that’s what I’ve told you over the last three, four years, but the business has really expanded over the past six months where today we actually sell full turnkey solutions for distribution centers and manufacturers, which include the hydrogen infrastructure, hydrogen, the fuel cell power for forklift trucks, as well as a service for that equipment.

Our customers include people like Wal-Mart; Sysco, the international food distributor; BMW; Mercedes; and Kroger, just to name a few…

Customers like Wal-Mart and Kroger came to us and said that it would be much simpler for them, since we’ve already been involved in 45 deployments, if Plug Power would take over the complete responsibility for the deployment.

It was really driven by customers, and that’s really why we had such great success in the fourth quarter, and we are able to book over $32 million in revenue with people like Kroger, who signed up for our turnkey deal.”

So from that “turnkey deal” in 2014 we jump to the Wall Street Transcript July 10, 2020 with a new interview with the President and CEO of Plug Power (NASDAQ: PLUG) and a price per share of between $8 and $9.

“I am going to give you a long-term view of the world.

Plug Power is a member of a global group called the Hydrogen Council, which includes 80 companies looking to develop this market.

We hired McKinsey to put together a study to tell us where it thinks the market is today as well as the applications that will make fuel cells more attractive than alternatives by 2030.

The long-term view of hydrogen is that it is a $2.5 trillion market, and that view includes storage of hydrogen for power processing and industrial heating where hydrogen is much more effective.

For example, if you are going to use electricity for steel or cement manufacturing, a need is there.

We talked about on-road vehicles here, but we also are interesting to a company like National Grid that is looking to convert a natural gas base into a hydrogen one to heat buildings in the U.K. by 2040.

Overall, it is a huge pie.

What is going to come first?

As the cost of hydrogen continues to go down, it opens opportunities for fuel cells.

That opens up huge markets because hydrogen itself today in the fertilizer and other industries is already a $30 billion to $50 billion market opportunity.

We see huge opportunities for ourselves just in material handling over the short term and over the next 10 years at a $30 billion annual TAM for on-road vehicles.

For large-scale stationary products, it could be as much as $15 billion, and that includes providing fuel cells for data centers.

You would think: Why would anybody do that?

Well, people like Microsoft are having issues today siting diesel generators at new data centers in places like Virginia, California and Singapore, where they are demanding that all their solutions be clean and green.

Top that off with the fact that the noise pollution associated with diesel generators has made it unattractive in many areas.

So there is a large market opportunity for fuel cells and hydrogen that are real today and will become more real by 2030.

The Hydrogen Council has a great report that was issued this past January at our annual meeting, and in it, McKinsey laid out the program of how there are 15 different markets in which hydrogen will be competitive with present technology by 2030.

If you look at our plans going forward, by 2024, we have been very public about our plan to be a $1 billion revenue company with about $750 million coming from our traditional business with customers like Walmart, Amazon, Home Depot, BMW, throughout the United States and in Europe.

We expect $200 million from on-road vehicles.

We are doing some exciting work with a company like Lightning Systems that is providing vehicles to Amazon, and we have a number of other partners we have been engaged with.

We see the stationary market being a $50 million market opportunity for us.

Currently PLUG is trading at about $21 per share, and the Wall Street Transcript has recently published a new interview with the CEO and President.  Read the entire interview as well as the past interviews for Plug Power, still on the cutting edge after over 20 years.