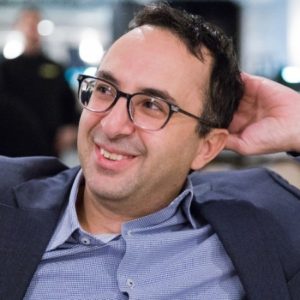 Sam Rubin is the President and Chief Executive Officer of LightPath Technologies.

Before LightPath, Mr. Rubin had a senior executive role at Thorlabs, where he was responsible for Thorlabs’ Imaging Systems Division, a standalone organization with its own sales and marketing, as well as global responsibility for all of Thorlabs’ life science activities.

Among the roles he upheld at Thorlabs, Mr. Rubin founded and grew Thorlabs’ operations in China, and spearheaded its entry and significant growth in the life sciences market. Mr. Rubin also led new strategic initiatives for Thorlabs, including new product lines, acquisitions and growth into new markets.

Prior to that, Mr. Rubin co-founded XLight Photonics, an optical communication startup, which was later sold to a telecommunications private equity firm.

Mr. Rubin holds a Bachelor of Science degree in electronic engineering from Ben Gurion University, a Master of Business Administration degree from New York University, Stern School of Business, and is a graduate of the Executive Education, Program for Leadership Development at Harvard Business School.

In this 3,857 word interview, exclusively in the Wall Street Transcript, Mr. Rubin details the strategic plans for his company.

“In the last few years, LightPath has taken that technology and extended it into an area called infrared, which means a completely different type of glass than the standard glass being used in regular lenses. We have been able to not only make the glass but also mold it into final shapes.

They are very cost-effective infrared lenses. The importance there is, when you look at consumer goods and almost any level of product that optics is significantly in, obviously the cost of the lens of the glass becomes more and more important.

As a recent example, one can take thermometers. We now see contactless thermometers being used such that they can be pointed at someone’s head or at a person to take a measurement without the person being touched. All of that is done with infrared optics.”

This creates an industry demand that is difficult to duplicate:

“…More of the world of optics and electronics and semiconductors needs a very small form of lens, such as the types we make, to be used in such devices.

The trend is now called integrated photonics. Basically, instead of the optics being completely separated from the electronics, they are being done together, so a chip is both a semiconductor and an optical device. Still, there is a need for a lens like ours to shape the light.”

This led to a recent demonstration of this competitive advantage:

“In China, its closure came right after the Chinese New Year, when we were contacted by the government during the Chinese New Year and asked to reopen the facility because of the growing need for our lenses in the devices that are used to measure temperature.

This competitive advantage is the basis for the future growth of LightPath:

“LightPath is really in a unique position from that point of view. We not only make the material ourselves, but we can also mold it into shape, which means we can mass produce it far more effectively…”

Get the complete 3,857 word interview with the CEO  of LightPath, exclusively in the Wall Street Transcript.