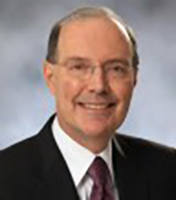 As CEO, Mr. Marsh directs all aspects of the organization’s objectives and focuses on building a company that leverages a combination of technological expertise, talented people and sales growth. Mr. Marsh continues to spearhead hydrogen fuel cell innovations, and his ability to drive revenue growth 300% has landed Plug Power on Deloitte’s Technology Fast 500 list in 2015, 2016 and 2017.

Previously, Mr. Marsh was a co-founder of Valere Power, where he served as CEO and board member from the company’s inception in 2001 through its sale to Eltek ASA in 2007.

Under his leadership, Valere grew into a profitable global operation with over 200 employees and $90 million in revenue. Prior to founding Valere, he spent almost 18 years with Lucent Bell Laboratories in sales and technical management positions.

Mr. Marsh is a prominent industry voice. Nationally, he is the Chairman of the Fuel Cell and Hydrogen Energy Association, and sits as a member of the Hydrogen and Fuel Cell Tactical Advisory Committee — HTAC.

Internationally, Mr. Marsh represents Plug Power in their role as supporting members of the Hydrogen Council, a global initiative of leading energy, transport and industry companies. Mr. Marsh holds an MSEE from Duke University and an MBA from SMU.

In his 2,774 word interview, exclusively for the Wall Street Transcript, Mr. Marsh details the advantages of his company’s alternative energy formula:

“What is not always captured is the degree that they are more cost effective than internal combustion engines. You can power an electric vehicle in two ways: lithium batteries or a fuel cell.

So why would you ever choose a fuel cell? Well, if you are driving a vehicle like a car, 4% of the time, you can charge it at home using batteries. They are the perfect solution.

But if you’re thinking about applications that are asset intense, then fuel cells have three unique advantages. One is, a fuel cell can fill up a car within five minutes.

Think about if you are driving a delivery van like a FedEx truck, and it has to go 150 miles a day. Filled up with hydrogen, it can be on the road all day. You can travel up to 500 miles often without a refill.

With batteries, a car has to recharge every five or six hours — and charging it may take an hour.

When companies like DHL and others want fast fueling, they like the energy density of fuel cells at certain points because it is 10 times that of battery electric vehicles. Because of that, you can carry more packages on board.

We also show a slide that was developed by DHL that shows battery electric vehicles running for 100 miles as Class 3 vehicles that cannot meet the minimum requirements for the number of packages you can put on board.

Fuel-cell-powered electric vehicles, because of the higher energy density of a hydrogen tank versus batteries, can go way over 500 to 600 miles and still exceed the minimum requirements for how many packages you can put on board.”

If you look at our plans going forward, by 2024, we have been very public about our plan to be a $1 billion revenue company with about $750 million coming from our traditional business with customers like Walmart, Amazon, Home Depot, BMW, throughout the United States and in Europe.

We expect $200 million from on-road vehicles. We are doing some exciting work with a company like Lightning Systems that is providing vehicles to Amazon, and we have a number of other partners we have been engaged with.

We see the stationary market being a $50 million market opportunity for us. We have laid out a five-year plan that says, at the end of 2024, our revenue will be $1 billion, our EBITDAs will be $200 million, and our operating income will be $170 million.”

These financial results have translated Plug Power into a dominant market participant:

“Five years ago, we were essentially the best system integrator in the fuel cell industry. But since that time, there has been a high level of integration at the system level, whereby we do hydrogen fueling stations, fuel cells and the aftermarket service.

We have a data center in Dayton, Ohio, that monitors our products 24/7. We also today are North America’s largest MEA supplier. The MEA is a critical component, much like a thin film battery layer in a fuel cell.

We are the largest manufacturer in North America of fuel cell stacks.

So when you start looking at the heart of our fuel cell engine, most of the critical components are actually designed and manufactured by Plug Power. We are really excited that we are beginning to move into large-scale hydrogen generation and distribution.”

The dominance is the basis for a long term strategy:

“One, if you look at the revenue and the customer set that Plug has developed, we are where most of our competitors are aspiring to be. Plug Power is doing business every day with Amazon, Walmart and Home Depot.

Two, no one has the broad technical and business capabilities that we do to meet all the needs in the supply chain for the emerging hydrogen economy from hydrogen generation to building fuel cell stations to building high-end fuel cells or capabilities in MEAs. These achievements just uniquely separate us from our competition.

I would go as far as to say that, when you look at the market cap and then the revenues for our competitors, as in comparing us to folks like Nuvera, Nikola and others, Plug Power is greatly undervalued with its revenue and EBITDA potentials, and it has a much higher growth trajectory than they were projecting for the next five years.

An investor sent me a note last night that Plug Power is really the undervalued gem in the fuel cell industry.”

Read the entire 2,774 word interview with the CEO of Plug Power Andy Marsh, exclusively for the Wall Street Transcript.