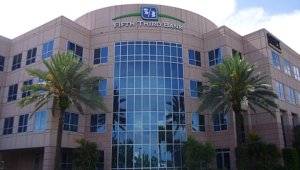 In this issue of the Wall Street Transcript, two top banking analysts picked FITB as one of their banking winners for 2021 and 2022 stock appreciation.

Peter Winter is a Managing Director at Wedbush Securities. He covers regional and Texas banks. He has 19 years of sell-side experience with CIBC World Markets, BMO Capital Markets and most recently, Sterne Agee CRT.

In his 2,007 word interview, exclusively in this week’s issue of the Wall Street Transcript, Peter Winter bangs the table for FITB investors:

“Fifth Third Bancorp (NASDAQ:FITB) is a well-run company. It’s another Ohio-based bank. They’ve got an expense initiative in place. They’ve done an incredible job to hedge the interest rate environment for a long period of time with rates being low. That’s helped support the net interest margin.

They’ve been very disciplined on waiting for higher rates to invest all its excess liquidity into either loan growth or security. So there’s a lot of dry powder sitting on the balance sheet — $30 billion in excess liquidity, earning 15 basis points. That would be a real earnings leverage when they put that money to work.

They’ve got capital ratios that are above their targeted levels, so they’ll be aggressive with buying back stock. They’re going to increase the dividend in the third quarter. It’s a great story with the way that they’ve positioned the balance sheet, capital, and they’ve got dry powder for earnings growth along with an expense initiative.”

Peter Winter has been a long term advocate of the stock, suggesting investors put their money to work there in this 2019 2,406 word interview, where he stated that:

“They have some earnings levers that other banks don’t have to generate above average EPS growth. There will be costs savings from the integration of its pending acquisition of MB Financial (NASDAQ:MBFI), expected to close in the first quarter. …they de-risked the loan portfolio and exited $5 billion in loans, setting the stage for stronger loan growth in 2019.

Prior to joining Janney in 2019, he was Co-Founder and Director of Research at FIG Partners LLC, a premier investment banking and research firm specializing in community banks. At FIG, he established and managed an award-winning Equity Research team that covered more than 150 banks, thrifts, and REITs.

Earlier in his career, he spent six years as Managing Director at SunTrust Robinson Humphrey and five years as a Research Analyst at Wachovia Corporation (formerly Interstate/Johnson Lane Inc.).

He has served as a financial expert and resource to global and national media outlets including American Banker, Bloomberg, CNBC, Financial Times, FOX Business, and The Wall Street Journal. Mr. Marinac graduated from Kent State University with a Bachelor of Science in Accounting and Finance.

He is actively involved with Atlanta Ronald McDonald House Charities, where he is serving his fourth three-year term as a board member.

In his 4,851 word interview in this issue of the Wall Street Transcript, Chris Marinac sees tons of investor upside in FITB:

“From the large-cap perspective, a company that I think is not fully appreciated is Fifth Third (NASDAQ:FITB). We have a “buy” rating and feel that Fifth Third has a lot of untapped earnings, primarily because they can put their excess cash to work in higher loans and higher-earning assets. The company is going to be very thoughtful about being a bigger lender in both the consumer and commercial channels. They will most likely do more consumers sooner.

There’s an opportunity for Fifth Third stock to continue to trade higher.

They are going to be pretty active in share buybacks. They told us that, but I think that’ll play out for them as well. So the stock has certainly done well in the big picture. There is more upside and a bigger valuation still ahead for the company. Also, just like I mentioned in that whole group, there is an opportunity for the Fifth Third to have a higher earnings estimate, which therefore helps the stock price to go higher from here.

TWST: When you mentioned untapped earnings, what do you mean exactly there?

Mr. Marinac: That there is excess cash. Cash and securities are a large part of the balance sheet right now. We think that can be higher or can be utilized in the higher earnings. That is the main point. The other point that rings true is that, in the case of Fifth Third, the share count was going to come down, so that the share repurchases are going to cause a lower share count, which therefore means higher EPS numbers.”

These strong affirmations of Fifth Third Bancorp (NASDAQ:FITB) are available exclusively in the Banks Report from the Wall Street Transcript.

Previous reports advocating Fifth Third Bancorp (NASDAQ:FITB) investments are available including this 3,768 word interview from Portfolio Manager Barry James:  “Fifth Third…is a national bank, but its focus is more in the Midwest, to be honest. That seems to be one of the areas that is coming back in pretty good order.

It is strong financially and has the ability to take advantage of the rising interest rates to boost the bottom line. We don’t like to see too much heavy overhead in the business so that they can take pretty swift advantage of the improving economy that we see.”

Stryker and eHealth are Two Top Picks from this Professional Portfolio Manager
June 26, 2020