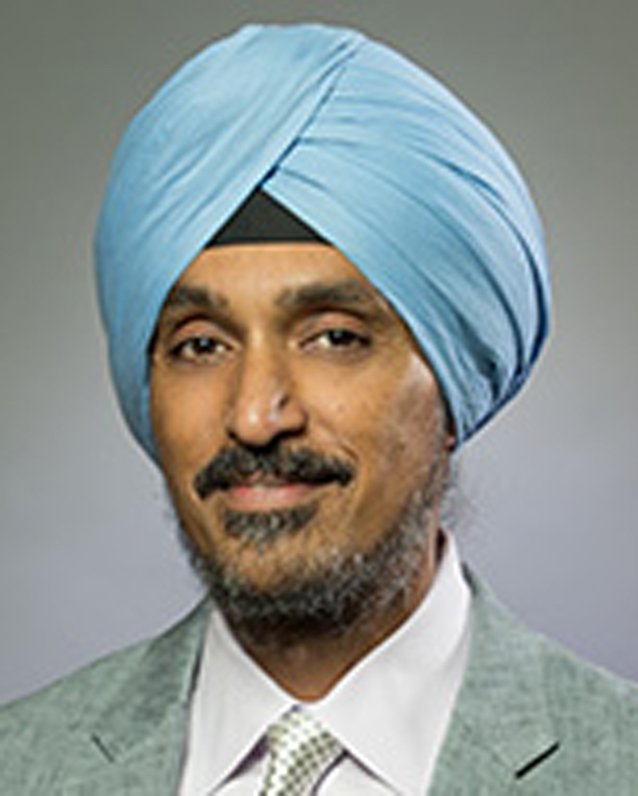 Hartaj Singh is Managing Director and Senior Analyst, Biotechnology at Oppenheimer & Co. and recommends Gilead (GILD) for investors looking for a biotech investment.

He began his sellside career at Lehman Brothers and subsequently moved to the buy side covering biotechnology at Visium Asset Management and Tecumseh Partners.

Mr. Singh has a B.A. in biology from Case Western Reserve University and also did graduate work in computational neurobiology. He received an MBA from Duke University’s Fuqua School of Business.

For investors looking to get started in biotech, Hartaj Singh believes Gilead (GILD) is at an excellent entry point.

And we have one of the highest price targets on it.

And it’s just human psychology that if things are not looking good in the outside world, you will generally tend to go to areas or stocks that are safer. So you’ll avoid higher-risk stocks.

And in that kind of an environment, the larger caps look very good. They don’t tend to be as volatile.

The large caps in biotech have already seen their valuations pretty depressed for a few years now, since valuations started declining during the back half of 2015. And since then, because of drug pricing concerns, and some other concerns, large-cap biotech has been undervalued.

And in a recession, potentially, investors would go to names that seem to be safer. And then Gilead (GILD) screens especially well because it doesn’t have a lot of binary pipeline readouts.

It’s got good likely top- and bottom-line growth of about in the low- to mid-single-digits.

Its dividend yield is probably the best in biopharma right now.

So if you’re looking for a safe haven, what in a very bullish economy would seem like a very boring stock that everybody would avoid, right now Gilead (GILD) may be kind of boring and it has a great dividend yield.

So we think actually Gilead (GILD) should perform better and better, especially if the environment seems to potentially indicate a recession going forward.”

Funding rates have affected startups rather than the Gilead (GILD) level biotechs.

There is a number that’s often thrown out, which has been published by various data sources, that it takes about $1 billion to get a drug to market, but that includes all the other drugs that failed.

And one out of every 13 drugs that gets into human beings for clinical trials actually makes it to market. So in biotech, the failure rates are tremendous.

But investors make the money off of the one drug that works, because essentially, it’s a moonshot or star-shot kind of project that more than makes up for all the other losers.

But that also gives an insight as to why biotech is so sensitive to the economic environment.

When cash is very constrained, meaning like in a recessionary environment, the incremental dollar from investors is more and more difficult to get.

And then, of course, sectors like biotech become very difficult to fund. And so, valuations start going down.

When a market is on an uptrend and people have more and more money to spend and can take riskier bets, then biotech is usually one of the first sectors to recover, because that’s when the risk-on mood is around to be invested.

And more focus on diseases where there’s a higher understanding of molecular biology, which is called the disease pathology — the underlying way the disease works — and then also where there are validated targets.

And that usually is in oncology, immunology, genetics, and the genetic underpinning of various diseases that become much more interesting.

So you won’t necessarily see somebody going after, for example, ALS or Parkinson’s.

But you’ll see investors go after parts of Parkinson’s or Lou Gehrig’s disease that have an underlying genetic component, and that’s a really a smaller subset of the overall Parkinson’s disease population.

So those areas have become much more focused upon by investors.”

Hartaj Singh has a portfolio approach that includes stocks like Gilead (GILD) but also some riskier companies.

Out of that four or five that are smaller and speculative, you probably want to put $2 to $4 in like United Therapeutics and Sarepta, and then $1 into companies where you’re looking for the home run, but which also might go to zero.

So you’re doing a mix of some smart beta with mid-cap companies like United Therapeutics or Sarepta that will give you some alpha and then, you just shade in a little bit of spice with that last dollar to get your home run.

And whether the markets are up or down, I would recommend that over and over again.”