Gbola Amusa of Chardan Partners is a Genius 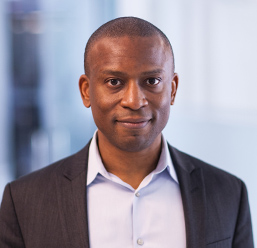 Gbola Amusa is Partner, Director of Research and Head of Healthcare Research of Chardan. Dr. Gbola Amusa joined Chardan at the end of 2014 to focus on identifying companies that will generate exceptionally high long-term investment returns by creating shared value for society.

Dr. Amusa was previously Managing Director, Head of European Pharma Research, and Global Pharma and Biotech Coordinator at UBS, where he oversaw 25 analysts and ultimately finished as the number-one-ranked European pharma analyst in the Institutional Investor — II — Survey.

Dr. Amusa earned his BSE from Duke University, an M.D. at Washington University Medical School and his MBA from the University of Chicago Booth School of Business.

In this 5,116 word interview, exclusively in the Wall Street Transcript, Dr. Amusa states the case for Regenxbio (NASDAQ: RGNX):

“We have our top picks for genetic medicines as MeiraGTx (NASDAQ: MGTX), uniQure (NASDAQ: QURE) and REGENXBIO (NASDAQ: RGNX)…The second one that I’ll talk about is REGENXBIO, which has innovated on vectors that are used by up to 10 to 15 companies, if not more, in the space to deliver a genetic payload to patients for gene replacement.
The company has 35 or so products in its portfolio, with roughly 30 of which that are from partners who are burning their own cash to potentially pay REGENXBIO a royalty in the future.
So it’s always great in therapeutics when someone else does the work for you and then you get a reward at the end if it proves successful. The most important partner for many years has been AveXis…which now is owned by Novartis (NYSE: NVS) after the acquisition, can come out of the gate strongly after perhaps May of this year.

REGENXBIO will get 10% of sales presumably, and that could turn REGENXBIO into a profitable company.Profitability is sometimes a metric that some investors use for just screening, so when you have higher demand for stock and more investors are interested, then all things equal, the stock goes up.

Obviously, REGENXBIO can generate a decent amount of royalty income that can be reinvested for growth, such as for furthering its own internal pipeline. REGENXBIO is interesting on another level since the market only models five to seven of its products, so that’s one level.

The second level is that REGENXBIO this year with its wet age-related macular degeneration program could produce data sets that convince people that gene therapy can be used for a mass-market disease.

Years ago, we took the view that you’re going to see initial successes in monogenic diseases, which are rare diseases, generally speaking, related to which patients were basically missing a protein. The gene therapy leads to gene replacement and protein replacement, so it is an easy solution and low-hanging fruit.

But there are diseases like wet age-related macular degeneration where there are literally over a million people in the U.S. and maybe 2 million to 3 million people in the key drug markets of U.S., Europe and Japan, so even capturing a small percentage of the market, as in a very small percent, could lead to a blockbuster since gene therapies are priced upfront for anywhere from five years to 10 years of benefit.

The company can generate a tremendous amount of revenues in an unpartnered way if the wet AMD product starts to show signs of success, which some would argue they have already shown and some would argue they need to show more, but even just a shifting of the market’s probability modestly upward on REGENXBIO can lead to stock performance.

This is because Eylea and Lucentis, the two products that dominate wet AMD and other retinal diseases, generated $10.5 billion in sales last year. If a gene therapy provides five years of Eylea- or Lucentis-like benefit, five times that figure would be over $50 billion for a market opportunity.

These are very vast markets in relation to REGENXBIO’s market cap.

So if the company proves that gene therapy can be used to make a drug that already is known to work, i.e., Lucentis, which is what REGENXBIO is trying to do with its ranibizumab product, then it opens up many mass-market opportunities for gene therapy. That, to me, is a defining product for gene therapy, if it works. So REGENXBIO is also potentially on the verge of history.”

Dr. Gbola Amusa was a firm believer in the potential of Regenxbio for many years.  In this 2018 interview also exclusively in the Wall Street Transcript, the Chardan analyst Dr. Amusa identified several gene therapy companies as potential acquistion targets, including AveXis, which was acquired shortly thereafter by Novartis.

“AveXis, which vastly outperformed as one of our top picks in 2016 and 2017, could file on Phase I data in SMA type 1. We have highlighted AveXis as an M&A target as well, potentially by any of the number of larger-cap players who have shown interest in spinal muscular atrophy.

Regenxbio (NASDAQ:RGNX) is our top pick in gene therapy since it trades at modest valuation, despite roughly 10 partners, including AveXis, and roughly 25 products in development, of which more than 10 are in the clinic. We have highlighted foreign companies that are trading at big discounts to Nasdaq-listed peers with similar fundamentals. These include GenSight (EPA:SIGHT), Lysogene (EPA:LYS), Oxford BioMedica (LON:OXB) and ToolGen (KONEX:199800).