Dr. Ioannou is a Bull on Nickel for the New Green Economy 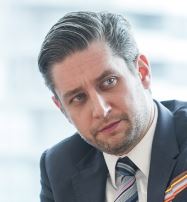 Stefan Ioannou, Ph.D., is an Analyst covering mining for Cormark Securities Inc.’s institutional equity research team. Dr. Ioannou is a mining engineer and holds a Ph.D. in economic geology from the University of Toronto.

He joined Cormark in December 2016, working in equity research for 13 years with Haywood Securities as a base metals analyst since 2006. Prior to that, Dr. Ioannou worked as an exploration geologist in Nevada and throughout the Canadian Shield.

In this 1,913 word interview, exclusively with the Wall Street Transcript, Dr. Ioannou explores how investors can profit from mining stocks.

“A lot of it comes down to your time horizon as an investor. For investors with patience, I think we’re still in the early innings of what could turn out to be a much higher metal pricing environment. And so when we think copper, nickel or even zinc, the longer-term prospect of significantly higher prices is fairly widely accepted.

The trick is, investors will still have to navigate potential short-term volatility to realize those gains over the longer term. Last year’s U.S.-China trade war narrative and this year’s COVID considerations being cases in point.”

The relevance of these political developments loom large in Dr. Ioannou’s evaluations:

Again, we’ve seen on the back of their initial COVID response a lot of stimulus go into that economy, building out new infrastructure while also replenishing depleted stockpiles, and so that’s helped metal pricing across the board.

Some other issues lingering in the background: Obviously, the U.S.-China trade war was never fully resolved ahead of COVID, so there still stands to be some follow-up from that to consider. We’re seeing a potential emergence of another trade war between China and Australia emerging now. Copper exports have been curtailed, coming from Australia into China. That stands to expand into other commodities as well.”

“The one thing I would note in the copper space specifically, when you look at the incremental demand from electric vehicles over the next 10-plus years, it’s on the order of about 10% to 15% incremental new copper that is going to be required to satisfy that new demand. It’s a significant number — copper that we don’t see from existing mine supply or even forecast new mine supply — so it’s something that’s going to stress the market from a pricing point of view, which is good for producers and investors in general.

Having said that, I’d say don’t just focus on copper, think about some of the other key metals in the “green” industry. When we look at electric vehicle batteries themselves, we hear a lot about cobalt and lithium, but actually, one of the other metals you really want to pay attention to is nickel.

When you look at a lot of the electric vehicle battery chemistries out there right now, anywhere between 60% and 80% of those battery cathodes are actually nickel.

Take a step back and look at the incremental demand for nickel from the whole emerging EV space. Nickel right now is about a 2.1 million ton per annum market. The incremental demand for nickel on the back of the EV revolution could be on the order of another 2 million tons a year over the next 10 years, so basically a doubling of nickel demand in response to EV adoption.

That, obviously, has huge market implications for nickel supply/demand fundamentals and the nickel price itself going forward.”

“In the producer space, Hudbay Minerals (NYSE:HBM) has really turned a corner. The company had a few question marks pertaining to various parts of their portfolio over the last year or two.

However, new management has really helped to right the ship, and I would say all of Hudbay’s internal growth projects are firing on all cylinders again.

There’s a solid outlook for the company in terms of increased production out of Peru, which is where their flagship operation is, as well as in Manitoba with respect to additional gold production. We also expect to get better clarity pertaining to the outlook for a large development project in Arizona toward the end of next year. So a lot of good growth advancements underpinned by a sound production foundation.”

“Moving down the food chain into the explorer world, a few names stand out to me. One is Filo Mining (OTCMKTS:FLMMF), an advanced-stage exploration project that straddles the Chilean and Argentinian border. Key there is the project was initially defined as a fairly robust near-surface oxide-copper-gold project, but deeper drilling over the last year or two has really unveiled that there could be significant sulfide porphyry potential at depth.

The latest field season just got underway and will be underpinned by deep drilling. And again, based on what we saw last season — 1,000-meter intercepts — this could be something that could easily turn into a world-class porphyry project very quickly.”

Get more picks and all of Stefan Ioannou’s detailed recommendations by reading the entire 1,913 word interview, exclusively with the Wall Street Transcript.

Stefan Ioannou, Ph.D., of Cormark Declares that Zinc is Better than Bitcoin
December 22, 2017

Michelle Stevens of Baird Equity Asset Management is a Bull on Small Cap US Stocks
September 06, 2018