Naeem Aslam of AvaTrade Predicts $100,000 Bitcoin by December 31, 2021 due to Institutional Demand 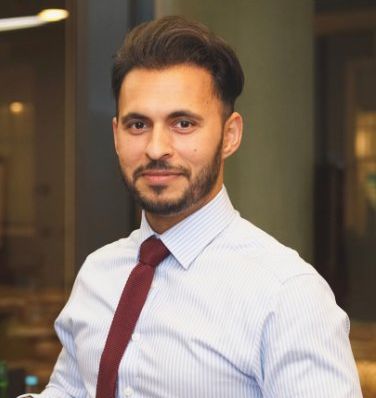 “…When we look at Bitcoin, from the adoption perspective, how many banks are already getting into it?

I think the overall sentiment is very, very positive, because institutions are buying them at every single possible depth. There is less hesitation, less qualms and concerns among them, when it comes to increasing their allocation with any possible depth that we see in terms of Bitcoin price.

So, our view is that any selloff or any flash sale, in terms of a bitcoin price, is only an opportunity to buy some bargains. Because Bitcoin prices are very much still on track, and will go to $100,000 by the end of this year. We still hold that target.”

This is the recent prediction in the 2,095 word interview with Naeem Aslam, QFA, Chief Market Analyst for AvaTrade.

He also is a columnist for Forbes and CNBC. He has been a guest on CNBC, FOX, Bloomberg, BBC and France 24. He appeared at the ACI Dublin World Congress, alongside Charles L. Evans, the Chicago Federal Reserve Bank President.

Bitcoin is not the only cryptocurrency followed by Naeem Aslam of AvaTrade:

“After Bitcoin, the next one that we really look at is, of course, Ethereum.

Binance coin, as the BUSD, is another one of interest. But apart from that, you have several other protocols, like Solana, Cardano, Avalanche.

Still, things are too early. Because we’ve been in the game for a very long time — since 2014 — we have seen many projects come and go. And then every time anything comes on the market, it’s always about: “Yes, this is a real challenge for Ethereum. This is going to be a gamechanger. And then it is going to really tear down Ethereum.”

But Ethereum is still there.

And then if you look at it from the adoptions perspective, among the institutions — I believe there was news today that Bank of America actually issued its digital assets using Ethereum.

So I think Ethereum is obviously the second most important asset in the space. And we believe that Ethereum coin can easily touch that $10,000 mark in the coming month or in the coming quarters — whenever that rally will come back.

After Ethereum is something that investors should look at in terms of a risk-to-reward ratio: Cardano.

It is certainly a really good project, which has a huge potential, especially on the tech side, if you look at the contracts.

Also, going back to Bitcoin, the biggest update that we are waiting for, or we’re looking at very closely, is a TapRoot update in terms of a technology upgrade that Bitcoin is going to see in November, which is the biggest network upgrade since the invention of Bitcoin.”

According the AvaTrade analyst Naeem Aslam, the demand for selected cryptocurrencies is already being driving by large institutional financial companies.

“There isn’t a single U.S. firm — whether you are talking about Blackstone (NYSE:BX), or whether you were speaking of Bank of America (NYSE:BAC), or whether it is Bank of New York Mellon (NYSE:BK), or any of these institutions — they are beefing up their teams around digital assets.

Because, for instance, in the case of MicroStrategy (NASDAQ:MSTR), you are just buying the shares directly and the company owns that.

Or in terms of portfolio, you can have crypto-related, such as PayPal (NASDAQ:PYPL) and several other companies, which are very much on the forefront of providing those services, and they have exposure to that…

In terms of Germany, as I mentioned earlier, you have a regulation, and the regulators have said that, yes, you can invest 10% of your portfolio for institutions or for family offices, you can allocate that.

And in addition to that, they are opening up several other opportunities for exchanges, for custodians to be fully regulated and operate in this space, whether it’s the U.K. or whether it’s Europe.

Especially in Europe, we have much friendlier regulations in terms of digital currencies, digital assets.”

The Avatrade analyst Naeem Aslam contends that the inflation fears currently making headlines in US and UK financial news are also a tailwind to cryptocurrency prices, and Bitcoin may replace gold as the traditional inflation hedge:

“One bitcoin or one kg of gold, that doesn’t really change.

But the purchasing power in terms of a dollar changes massively. Ten years ago, you could buy quite a lot of things with $100.

But now you can’t with the same $100. Inflation is very much eating at it, especially as we come out of the coronavirus.

And inflation, over in the U.K., some see it as very dire. And of course, inflation numbers in the United States are not that great as well.

And that just shows that, yes, your purchasing power is really going down. The dollar is losing its value.

But in terms of a bitcoin, no, because you only have a limited supply and that’s the maximum supply you’re going to have. And after that there is no more supply left.

So one bitcoin will have the same value of that one bitcoin. So if you price something in Bitcoin in terms of whatever the product or services, that is more likely to stay stable in terms of inflation…

We are talking about a $9 trillion market cap in terms of gold.

Bitcoin just went up to $1 trillion. Gold has been held for hundreds of years.

I think, when it comes to gold, it is still going to be there for a very long time. But a small proportion of those portfolio allocations will continue to increase towards Bitcoin, where we could see a premium allocation towards Bitcoin anywhere between 4% to 7%, or maximum of 10%.”

Get the complete analysis from Naeem Aslam of Avatrade by reading the complete 2,095 word interview exclusively in the Wall Street Transcript.

Bitcoin is the New Gold Says the Man Who Predicted this Current Price in 2019
October 20, 2021

Stefan Ioannou, Ph.D., of Cormark Declares that Zinc is Better than Bitcoin
December 22, 2017